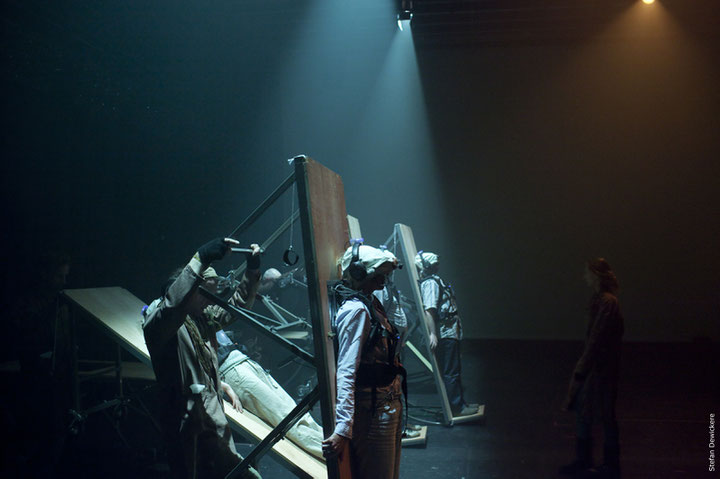 ›Terra Nova‹ is the latest theater piece by Crew, a team of artists and researchers led by the Belgian artist Eric Joris. Together with theater director Stef De Paepe and author Peter Verhelst, Joris staged a play about two thrilling, but entirely different scientific quests. The first one is the present day race to be the first to discover the ultimate truth about the functioning of the human brain. The second one tells about the race to be the first human being to reach the South Pole. The latter race was won by the Norwegian Roald Amundsen in 1911. The play by Peter Verhelst focuses however on the tragic story of the British scientist and explorer Robert Falcon Scott. Not only did he reach the South Pole only to discover the Norwegian flag was already planted there, on his return he and his whole crew died in a terrible way of cold and starvation.
Even if the South Pole has more or less the shape of the human brain, the link between both themes might seem odd. Verhelst\'s text however doesn’t tell Scott\'s story from the outside, but allows us to look inside his head. Through the actor Robby Cleiren, we witness the ailing thoughts of someone who knows he is about to die, but still keeps writing down his experiences until the bitter end. Cleiren is sitting down in the dim light of the phosphorescent paint on the floor. This eerie atmosphere matches Cleiren’s imagination which often drifts off into weird speculations and associations. Sometimes however, Cleiren also addresses his absent wife in the most tender words. You might swear you are watching someone who is slowly turning mad.

This is all the more so because of the presence of Stef De Paepe at his side. He is prompting Cleiren all the time to go on speaking, as if he were a psychiatrist or scientist conducting a bizarre experiment. In this way, Scott’s story suddenly also turns into a case study of the way the brain tries to make sense of an utterly hopeless situation. This uncanny capacity of the brain to forge meaning where hardly any is to be found is what also keeps brain scientists busy today. It is, so to speak, their last frontier, just like the South Pole was for geologists. And most of all: the delusions Scott suffered in his death struggle are not unlike the delusions our brain makes us undergo daily, even if we are hardly aware of them. That is the link with the other theme of ›Terra Nova‹.
This other theme however is not tackled in a classic theatrical setting as Scott’s story is. Nor will any spectator ever witness all of the performance of Robert Scott as done by Robby Cleiren. From the very start, the public is divided by a team of assistants into five groups. The assistants are dressed in lab coats in a drab brown color and sturdy boots. It makes them look like odd hybrids: half scientists, half jail keepers or military. This is quite appropriate, because they turn the public into involuntary guinea pigs for several brain experiments. Just as you witness the race for the South Pole from inside the brain of Scott, you experience the research on the brain in this way from the inside.
What actually happens is that each group of spectators is alternately exposed to one of three possible situations. While one group is plunged into a virtual reality, the other groups follow this experiment from the outside or assist in (a part of) Cleiren’s performance. At the end of the piece however, all groups but one watch how this last group is going through the virtual experience of being lost at the South Pole, in much the same way Scott did.
Crew is not new to this kind of experiment in virtual reality theater. At least since 2003, Eric Joris has been developing ›immersive theater‹. This is a kind of theater in which the story is not represented on a stage by actors, but is directly experienced ›from the inside‹ by the spectator, who as such also becomes the main protagonist of the action. This is why Joris doesn’t call them ›spectators‹ but ›immersants‹. This has huge consequences for the theater he makes, because the ›immersants‹ lack an overview of what is happening. Instead, things happen to them without any control on their side. It is no coincidence that one of the themes Joris is fond of is the story of Oedipus, the man who didn’t understand the true meaning and consequences of his own actions, and was all but a puppet in the hands of the Gods.

Technically, this is done by equipping immersants with a ›Head Mounted Display‹ (HMD) –goggles with small TV displays and headphones. Once these are in place, the immersant sees and hears mostly prerecorded images. These images are however experienced as completely real, because they follow the (head) movements of the immersant. This calls for omni-directional images as well as a tracking device. It also requires a very cunning transition between the ›real‹ perceptions of the immersant and the virtual ones. Joris developed these complex technological devices in close collaboration with Philippe Bekaert, the chief investigator of EDM, the ›Expertise Center for Digital Media‹ of the Hasselt University in Belgium.
Though they are fully aware of the ›fake‹ nature of what they see, immersants tend to adopt this virtual reality as totally real, even if their actual movements are at odds with the images they receive. In this way, the CREW experiments obviously tell a lot about the way the brain functions. They demonstrate how the model of the world our brain constructs often overrules the actual data we receive through our senses. They show how the brain can lure us into erroneous interpretations of what we perceive. But through his experiments, Joris also often demonstrated how the body can trick the brain to experience things that are not there at all. This is why in many immersive experiments, the immersants were invited afterwards to watch what they had really gone through by looking at other immersants.

This unveiling of the ›secret‹ of the immersion often helped people to overcome sudden feelings of nausea when the rift between actual and supposed movements became too big. What is however particular about ›Terra Nova‹ is that the combination of the immersive experience with the observation of other immersants afterwards is not only of didactic use, as it mostly used to be. Instead, the combination helps to illustrate the theme of the piece in a very convincing way. While one group is ›living‹ a situation, the others follow the film they see on a screen or on the pc’s mounted on rucksacks the immersants wear.
In one virtual experience, the immersants are victim of the experiments of a kind of mad scientists, a role by Stef De Paepe, who wants to ›help‹ people to get rid of their natural fear of death. This suddenly also explains what De Paepe is doing at Cleiren’s side when he is playing the role of Robert Scott. In a second virtual film, one discovers how frightened immersants get when a virtual rat is licking their hands. It is an extremely telling moment, for the spectators as well as for the immersants, because this is a ›reenactment‹ of a classic brain experiment that Metzinger describes in his book ›The ego tunnel‹. It shows how the human brain can project feelings onto inanimate things or other persons. It appears that if a person sees a rubber hand being tickled (or nibbled at by a rat), he involuntarily experiences the same feeling in his own hand. That experiment is repeated here in a virtual way, but the fears expressed by the immersants are no less real for that.
As I said before, the last virtual experience is tying up all the themes of the play. As one group is plunged into the last moments of Robert Scott, the rest of the public watches how they wander around aimlessly. However gripping and tragic this moment can seem, the real point is that it shows in what incredible measure we respond more to what we think we see than to what there is actually to be seen. In this case however, it fortunately does not lead to our death, as it did in the case of Scott, but to greater wisdom.