Eastern enlargement to the East

The Polish collective Krytyka Polityczna is currently expanding into the Ukraine and Russia: but is its Polish success story really transferable? 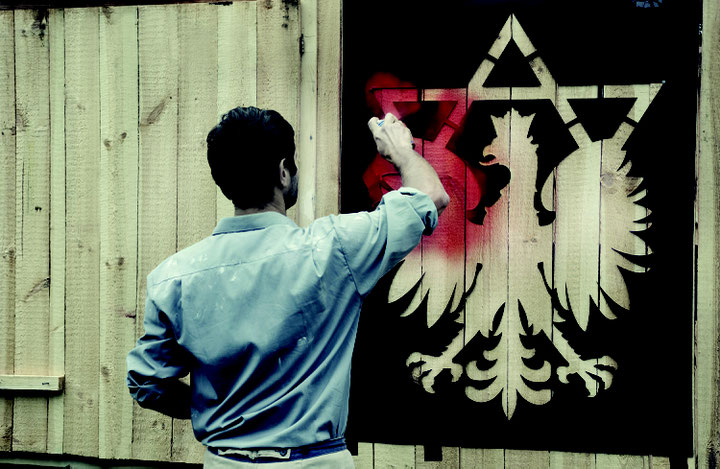 A magazine, a publishing house, a group of intellectuals and artists, a cultural producer, an event organiser with activities in the country’s major cities, an informal educational institution and probably the country’s leading leftist intellectual think-tank: for some years now Krytyka Polityczna (Political Critique) has been considerably more than a well-managed label in Poland, with 120 employees on its team at present, working for 2,000 activists both in Poland and abroad.1 Recently Krytyka Polityczna has also left a decisive mark abroad: a prominent presentation at the 2011 Venice Biennale, a massive presence in the Ukraine and soon in Russia too.
Krytyka Polityczna (K. P.) itself is nonetheless a fairly recent phenomenon. The inception of the grouping, which emerged around the eponymous magazine project, can be traced back to 2002. In 2005 a formal structure was set up – »Stowarzyszenie im. Stanisława Brzozowskiego«, the Stanisław Brzozowski Association. Both the name of the association and the title of the journal refer to Polish intellectual history, specifically to the late 19th and early 20th century. The multi-faceted and left-leaning intellectual Stanisław Brzozowski (1878–1911) played an important role in paving the way for subsequent Polish literature. In the early 20th century »Krytyka« was the title of an influential Krakow monthly journal which addressed societal issues, science and art.
More than half a century later, »Krytyka« was also the title of an important Polish samizdat publication and this explicit reference to the resistance against the Communist regime can be considered one of the key components in K. P.’s programme. The leftist group, which at times also adopts a Marxist focus, has no affinities with the Socialist People’s Republic of Poland. It also draws a clear dividing line between itself and Poland’s post-Communist ruling politicians, who number among the Social Democrats in the EU context. »The post-Communists did act the part, behaving as if they belonged to the left« sociologist, co-founder and »K. P.« editor-in-chief Sławomir Sierakowski explained in 2007, »but they were not seen as the defenders of social benefits or the working class. But rather as a trade union for ex-apparatchiks«.2 As the co-founder of the group highlights, what is missing is a leftist discourse alongside the liberal project of modernisation, presented as the only option (currently manifested in Poland in the form of the governing party »Platforma Obywatelska«/»Civic Platform«), and a conservative project focusing on notions such as the nation, God and the family (represented by the Kaczyński party »Prawo i Sprawiedliwość«/ »Law and Justice «).
»My circle, my group is something like a left-oriented Opus Dei: not a party, not a media group but a growing group of people who have this small medium, this thick magazine«, Sierakowski stated back then. Precisely because of the shortcomings of the post-Communists there is, he explains, a need to position a third ideological discourse in the Polish public sphere and to root this in the collective consciousness too. In this context K. P. did not at all view itself as merely the »cultural left«, focussing instead also on discussions of concrete social issues in this EU star pupil from Eastern Europe, and seeking to address specific political approaches to devising solutions within the context of its own think-tank too. »I am not especially interested in philosophers. I think they have had their day. I am interested in practitioners – people who really do something«, video artist and K.P. team member Artur Żmijewski recently explained on openspace.ru.3
There was speculation in 2007 as to whether this circle should not become a genuine party as soon as possible and take part in the parliamentary elections. That step has however not (yet) been taken. At the same time, over the last few years the process of »institution building« has continued at a dramatic pace – as manifested in K.P’s employee figures and in other indicators such as its growing number of book publications. More recently, a banal real estate decision has played its part too: K.P has been running its own cultural centre since 2009, with a prestigious address on Warsaw’s ulica Nowy Świat; in a two-fold allusion to the name of the street and to Aldous Huxley, it is called the Centrum Kultury Nowy Wspaniały Świat – Brave New World Cultural Centre.
As well as text-heavy projects, the visual arts and engagement with these art forms are also an important vehicle deployed by K. P. to disseminate their own discourses. In addition, there are numerous artists in and around the group: the art editor of the magazine, for example, is Żmijewski, already cited above, who will also curate the 2012 Berlin Biennale, and Israeli artist Yael Bartana, who represented Poland at the 2011 Venice Biennale. Bartana’s project »… i zadziwi się Europa« (… and Europe will be stunned) takes an unorthodox look – entirely in keeping with K. P.’s provocative spirit – at the historically difficult relationship between Poles and Jews. At the heart of her Biennale piece are three short propaganda films about a (fictitious) political initiative with Sierakowski in the lead role. In one of these films he gives a full-blown political speech, calling on millions of Jews to »return« to Poland. In his short statement at the Biennale opening in Venice, the sociologist was clearly pleased that Bartana’s project had managed to disturb rightwing politicians in both Poland and Israel.

»Polityčna Krytyka«
Outside Poland the group’s most striking involvement to date has been in neighbouring Ukraine, under the (Ukrainian) name of »Polityčna Krytyka«. In February 2011 the first Ukrainian edition of the magazine was presented in Kiev, concentrating primarily on drug policy. The second edition is to be released soon, focusing on questions of nationalism, which has been a major topic recently in Ukraine in the light of the growing influence of the rightwing-populist/extremist party »Svoboda« (»Freedom«). Work on the third edition, scheduled for publication in early 2012 and addressing gender issues, is already underway. Plans are also afoot to create a concrete institutional basis for the group in Ukraine: currently its activities are organised under the aegis of the Centre for Visual Culture of the state-run Kiev Mohyla Academy. The group has an ambitious programme in Kiev too: »We most definitely do not want to turn into a niche group, and with the magazine we are aiming to re-politicise public debate «, explains Oleksij Radynskyj4, cultural sciences expert and editor of the Ukrainian edition. The notion of influencing the mainstream media is also discussed explicitly.
The history of contacts with Ukraine is rather straightforward. Polish is an important foreign language in Ukraine, and is spoken widely, particularly in the west of the country. Intellectuals from Kiev discovered »Krytyka Polityczna« and other publications from the eponymous publishing house a few years ago in Polish bookshops. »I was pleasantly surprised that someone in Poland was publishing exactly the kind of things that also interested me and my comrades in Kiev«, Radynskyj recounts. Subsequently members of the Polish group took part in conferences in Kiev and Sierakowski also expressed his interest in Polish-Ukrainian cooperation. Radynskyj explains that K. P. has always taken an interest in the erstwhile Russian-language and Eastern European tradition of the socially engaged intelligentsia – a tradition, which had however almost entirely vanished in contemporary Poland over the last 20 years. The format of the magazine also picks up on Eastern models: it corresponds to the traditional »tolstyj žurnal«, the »thick journal«, those voluminous, text-heavy periodicals that were more or less compulsory reading for the Soviet intelligentsia.
»It meant a new kind of dialogue with Poland for us. Otherwise the impression we glean in Ukraine is mostly influenced by the propaganda of Polish neo-liberalism. There Poland is held up as a role model for societal transformations that really ought to be emulated «, as Radynskyj underlines. K. P. takes a different stance in this respect, for example drawing attention to the problem of poverty in Poland.
Over and above K.P’s involvement in Ukraine, activities in Russia are also in the pipeline. A fairly large K. P. delegation travelled inter alia to Moscow and St. Petersburg to look for cooperation partners in April 2011 and there has already been artistic input from the K.P. context in the form of the Moscow exhibition »Auditorija Moskva« (Auditorium Moscow), curated by Ekaterina Degot in September 2011.
Although the collective, as editor Radynskyj emphasises, stands out from the institutional crowd due to its strong ethos and joint actions, it is in particular also Polish realia that have made a group such as K. P. possible at all. Just think of Polish universities, where even younger intellectuals also earn a wage that lets them survive within society, of media that pay halfway acceptable fees for guest commentaries from K.P. thinkers, of state funding of cultural institutions or a well-functioning journal and book market. All of this is virtually non-existent in Ukraine; even in Kiev it is almost impossible for intellectuals to earn a living from their actual intellectual work. Nevertheless over the last two to three years a larger loose grouping of politically engaged intellectuals has formed, publishing in Kiev, for example, the sociological magazine »Spil’ne« (Commons), the political-literary journal »Prostory« (Spaces) and now also »Polityčna Krytyka«.
The situation is somewhat better in Moscow, although groups that could have grown into something like Krytyka Polityczna have so far not succeeded in gaining a foothold. For example, the discussions with high-calibre panellists, which were the hallmark of the Moscow Ad Marginem publishing house in the 1990s, ultimately did not manage to generate a critical mass. The intellectual publishing house NLO, with several »thick journals« and a wide-ranging programme of cultural and literary studies publications to its name, exists thanks to subsidies from oligarch Michail Prochorov, who has now also entered the political arena – his sister Irina is the head of NLO. The artists’ group Čto delat’? is never really active beyond the bounds of art institutions and the same holds true for Viktor Misiano’s art journal »Chudožestvennyj žurnal«. The »editorial line« of the online medium openspace.ru, strongly influenced by Moscow intellectual Ekaterina Degot, is shaped by a very small number of individuals. And, if the owners of the medium want it that way, it can be altered from one day to the next.
There is indubitably great interest both in Ukraine and in Russia in collective efforts to establish intelligent and socially committed repoliticisation after an era in which the political realm was totally discredited. However, it remains to be seen how productive the impetus from Krytyka Polityczna can be.