The living room: Hospitality and plasticity 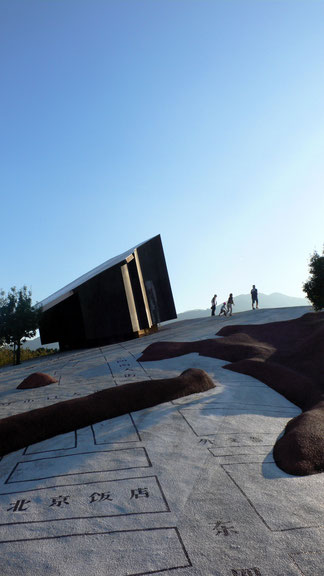 „Plasticity“, in its nominal form, is etymologically linked to two older words, the substantive „plastic“, and the adjective „plastic“. All three words are derived from the Greek „plassein“ which means „to model“ or „to mould. “ „Plastic“, as an adjective, has two meanings. On the one hand, it means „to be susceptible to changes of form“ or „to be malleable. “ Clay, by virtue of its capacity to receive form, would be „plastic“. On the other hand, „plastic“ also means „having the power to bestow form“. In the expressions „plastic surgery“ or „the plastic arts“ which include the sculptural and ceramic arts, „plastic“ refers to the capacity to assign form. The term „plasticity“ describes the nature of that which is plastic, capable both of receiving and of giving form.
We have certainly not yet exhausted plasticity’s range of meanings, which continues to evolve with and in language. Think, for example, of all the various forms of „plastic“ in our world, for example plastic wood, plastic money (hence the expression „to pay with plastic“), plastic paint and plastic explosives [le plastic], the dangerous plastic putty-like material that can be shaped by hand. The very meaning of plasticity itself appears to be plastic, mapped somewhere between two extremes. On one hand, plasticity describes the crystallization of form (as is suggested both by the substantive uses of the term and by the expression „plastic arts“). On the other hand, plasticity appears diametrically opposed to form, describing the very annihilation of concrete form (suggested by the unstable and destructive character of „plastic explosives“).
I will here try to make use of the concept of plasticity to elaborate on the concept of cosmopolitanism, and propose a critical articulation of the three terms „cosmopolitanism, “ „globalisation, “ and „nationalism“, as well as the question which follows of place and of the fitting-out of space. I will then confront plasticity with what Lévinas and Derrida, in particular, have thought out by way of the problem of hospitality.

There is nothing inconvertible.
The assertion of inconvertibility lies, for Marx, at the heart of fetishism. On the face of it, the fetish always occurs outside the operation of exchange, outside the market. From then on, when otherness is fetishized by its resistance to plasticity, when hospitality continues to be thought as the „counter“ to plasticity or, in other words, against form, it is no longer possible to distinguish cosmopolitanism rigorously from hyper-capitalism.

Thinking out the relation between cosmopolitanism and place thus requires thinking out another sort of relation between hospitality, on the one hand, and form and convertibility, on the other, a relation within which nothing escapes transformation, or the operation of exchange. We need, in the wake of deconstruction, to bring the trace up to date. In a manner that would prevent the trace’s non-deconstructed sanctification, we need to think out more carefully the relation between the trace and form, and more specifically, the nature of the trace’s necessary convertibility into form.
It is not a question of denying the inexhaustible and limitless character of alterity. Any form of resistance supposes the limitless, which originates from somewhere else, the exotic energy of a surplus of force. It is a question quite simply of pointing out that the economy of the inexhaustible, far from opposing plasticity’s sphere of activity, in fact defines it.
Form’s three-fold game – the giving, the receiving, and the annihilation of form – does not in effect refer to three separate operations which would describe, first of all, the imposition of form onto a material, secondly, the manner in which this material is then determined by the imprint, thirdly and finally, the unjustifiable and incomprehensible act of terrorism which completely annihilates form. In actual fact, it is a question of one single movement which combines formation and destruction, and this movement is precisely that of the regeneration of the inexhaustible or the limitless. In biology, plasticity refers to the capacity possessed by some living beings, for example, the salamander, of regenerating their amputated body parts. The Australian lizard Eastern Blue-tongues, when threatened, may discard their tail. The tail stump rapidly heals and a regenerated tail grows back after a while. Plasticity designates the capacity to regenerate form itself. Today, we know that these regenerative capacities exist in all organisms by virtue of stem cells. Regeneration, the emergence of form – the form of a new limb, of a new organism, or of a new cell – coincides with the erasure of the trace: the trace of the wound, the trace of the former cellular state. This movement of regeneration combines both formation and destruction, the birth of a new form and the decline of another.
There is a park in Japan, the Yoro park, that has been designed by the artists Arakawa and Madeline Gins. This park is referred to as „the site of reversible destiny“. It is a space made up of (what the artists call) “landing sites“. Each site is structured by two slopes; one goes towards the past, the other towards the future. Visitors are thus free to interpret the structure in the light of their own experiences. Onlookers can turn their destinies around, by returning to their infancy, or by advancing in age, or by doing both together, regenerating themselves, as it were. In their book, Architectural Body, the artists tell us that the park presents itself as „an open challenge to our species to reinvent itself. “ It is a question of implementing an architectonic of regeneration by means of different types of forms and furnishings, forms and furnishings that would function much like architecture’s stem cells.
To bring this paper to a conclusion, let’s return to the double principle of hospitality marked out in Lévinas, a transcendental principle and an empirical blueprint for the fitting-out of the living room. A layout for plastic hospitality would take up once again the articulation of the two planes of substitution, the first ethical, the second material, but the layout would base itself on, and not against, the convertibility of the trace into form. The resistance to capitalism never consists in affirming the existence of something that remains inconvertible . On the contrary, we agreed with Marx: everything is substitutable, everything is replaceable.
The resistance consists rather in attempting to distinguish, in convertibility, two processes which are outwardly very similar: plasticity and flexibility. Flexibility, however, refers only to the movement of the receiving of form, and merges with pure and simple adaptability. Plasticity, by virtue of its capacity to give form, refers to an adaptability which obeys its own norms, a suppleness which at the same time resists docility. To be flexible is to receive form, to allow the imprint, to be able to be bent without breaking. Flexibility means giving in and not giving; it means being docile, not exploding. Flexibility lacks, in effect, the very means for the giving of form; it lacks the power of creating, of inventing and thus also of erasing an imprint. Flexibility is plasticity but without its genius.

And so, we will no longer oppose trace and form. We will oppose plasticity on the one hand, with plasticity’s ideological avatar, its embodied misadventure, on the other, while admitting that we will never be able to know for sure whether being hospitable means being plastic or merely being adaptable or flexible. But, after all, why not attempt to give form to this hesitation?