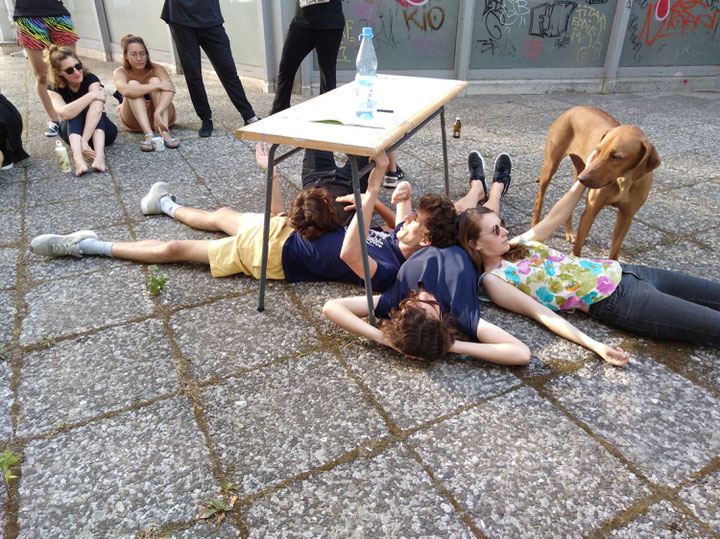 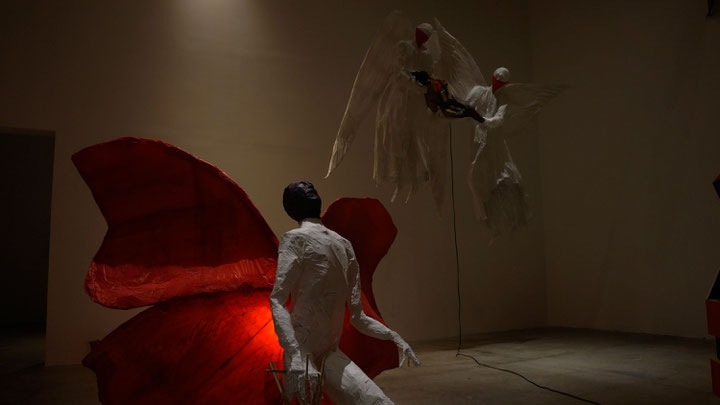 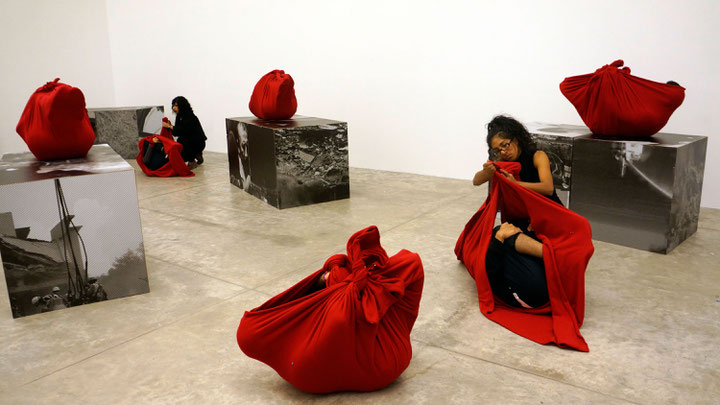 “Progress” seems is a quite overdetermined concept. Overall, the idea of progress is historically rather novel. For many centuries, the dominant belief was that the existing state of affairs was the best possible one without any development needed. The concept of progress was developed in the 18th century aiming at a kind of secular teleology. It was based on the conviction that the world could be altered according to progressing scientific knowledge; and that the world would necessarily improve in all sorts of respects. This optimistic outlook is under massive attack nowadays. With regard to the “successful” neo-racist politics that the far-right is pursuing, the left frequently remains baffled. In this interview, Oxana Timofeeva and Dmitry Vilensky of the artist group Chto Delat are pondering alternatives.

Pascal Jurt: In August 2018, Chto Delat organized a Summer School at Vierte Welt in Berlin as an experiment in performative pedagogy. The title of your performance was taken from Malevich’s legendary quote “Go and stop progress”. Why did you choose this title?

Dmitry Vilensky: The school was focused on the questioning of the idea of progress, and we thought that this provocative quote would help us navigate different ideas and practices (western and not so western), which question the notion of progress.

Oxana Timofeeva: The quote is not as simple as it may sound. Where, in which direction does one have to go to stop progress? How can one stop it? Why should one stop it? As Walter Benjamin wrote in his famous essay on the notion of history, progress is the name of the storm that blows and pushes the angel of history back, out of paradise. What the angel sees, under the name of progress, is wreckage and catastrophe. He wants to stop and heal what has been smashed in this movement, but this does not seem possible.

Jurt: Can progress, which has so long determined the narrative of modernization and social redistribution, still be a significant category today? Are aspects of progress or more viable approaches to overcoming unjust, non-egalitarian relations perhaps to be found in the cultural realm rather than elsewhere?

Vilensky: We need to sort out what we think of under the term progress. Of course, there is the obvious and simple critique of progress as an idea of GPD growth and increasing human capacities to control and exploit all types of resources (human and technological ones). But there are many more sophisticated approaches which can be simplified under the idea of a search for non-alienated forms of life, which make humans happy and live in harmony with themselves and the environment. And this is exactly what culture is about.

Timofeeva: Apparently, we still want to be progressive, and not reactionary. Progress is a twofold or better, manifold notion. On the one hand, there is the progress of capitalist technologies, which sometimes appears as a rapid progression with catastrophic consequences. Technological developments subordinated to the production of value are paradoxical: what we expect from technologies is growing freedom, but what we get instead is an increase of the level of enslavement and (self-)alienation. As Byung-Chul Han notes in one of his essays, our gadgets are our personal mobile working places that are always with us, even in bed – they make us always available, so to say, ready to produce, ready to achieve whatever is achievable. On a global scale, in order to perfect the conditions of our species’ survival, we gradually destroy the planet and at the same time conquer cosmic space in order to escape. This is capitalist progress; the best image of it is a waste dump, mountains of garbage, dead whales, and plastic in the ocean. But does this mean that we should go back to Mother Nature, return to the preindustrial mode of production? For the last decades, such conservative moods have become popular even among the left, but of course we all know that Nature in this kind of narratives is nothing but the object of market speculations: an eco-friendly life is a new luxury for the first world or upper-class people. This is definitely not what we propagate.
On the other hand, we believe that “other” technologies and “another” kind of progress are somehow possible. The problem with technological progress is not that it is bad, but that it goes wrong. One has to stop it maybe in order to change its direction, to liberate it from the burden of the necessity of the production of value. There are some hidden, unrealized potentials in history. We can only grasp them in a utopian perspective, and yes, in this regard, a lot really depends on how far cultural workers can go in their experimentation.

Jurt: Should we give credence to ideologies of progress that locate it above all in the technological realm, possibly harboring as a hidden agenda the conviction that societal mechanisms will somehow come into play in the wake of developments on the technological front?

Timofeeva: In a way, yes – and this continues what I’ve already said about really existing technologies that are captured by Capital, and utopian, not-capitalist technologies – why not call them communist technologies? By communist technologies, I mean something that was already stated in the early Soviet years by the great writer Andrei Platonov: the end of technology is to make nature more “kind to us”, because nature is neither great nor abundant, it resists. The goal of communist technology is not to consume nature, but to make humanity conform to it and vice versa, but not in a manner of simply letting it be: communists wanted to change the very nature of nature, by means of technology. Obviously, this was not done well, and the naïve attempts of the Soviets to turn rivers etc. lead to ecological disasters. But this happened because the idea of progress and technology was still all-to-human, too anthropocentric. Changing it may not mean to violently master it, but rather to create possibilities for nature to change. Just think about the initial meaning of the Greek word “techne” – craftsmanship, craft, or art. Communism should not appeal to something natural (that’s what fascists do, for example, when they invite everyone to follow the cruel natural order of violence and domination) but to the artificial, that is, to the new, invented, produced, or better, the “co-produced”. Communist technologies should return to this meaning, keeping the spirit of invention that we own as a species. But technologies will not turn in this direction by themselves; there is no instance of self-determination in them. The only way in which technologies can bring about social change is, as I see it, something like a robot’s rebellion, an effect of the machines acquiring self-consciousness that pushes them forward into emancipatory struggle. Now that a new slavery of these non-human agencies develops, such a perspective does not seem unrealistic. Otherwise, technologies are not able to automatically transport us into a better future.

Jurt: Today we are facing different approaches to progress. Left accelerationism stresses the link between emancipation and technical progress. The call for an epistemic acceleration proclaims that now it is time to anticipate and accelerate, time for “anastrophism” and not catastrophism. What do you think about this strategy?

Vilensky: I consider it pretty much in line with a classical Marxist approach. It is legitimate but at the same time, we have a growing feeling that there is not so much time left. Also, we see that technical progress which somehow carries a promise and potential for liberation leads more and more to enslavement. Dystopian tendencies obviously come to the fore.

Timofeeva: Paradoxically, in acceleration one can find a hidden Heideggerian belief that where there is catastrophe there is also salvation. There is this messianic moment that miraculously, capitalism will finally destroy itself and we will jump directly into communism. The first problem with this is that what capitalism destroys is not itself, but the world around us. There will be no one left to enter this wonderful future that will come after the supposed catastrophe-salvation (let’s call it Armageddon). The second problem is that catastrophe does not linger somewhere in the future, but that it is happening here and now. It’s not that we should sit and wait that the things will get really bad. They already got bad enough, just look around – everyone is depressed, even cats are depressed. I don’t think we should accelerate capitalist technological progress. We should go and stop it, that’s the point.

Jurt: What is even more disappointing in the proposal of acceleration is not the strategy (the “pensée de derrière”, as Pascal would have said), but its tactics, hence its policy. I wonder why some kind of naïve “Leninism” mingled with a somewhat literary Debordian radicalism is so present in accelerationism. After the failure of a repeated Leninism in the ultra-left of the 1960s and 70s, we have to face the problem of the political organization of the multitudes (plural) and here, replacing the word proletariat or working class by “multitude” as the main political category might seem elegant. But I am not sure that this is very efficient and satisfactory. More investigation, more science, and collective experience is needed to set up a tactic – would you agree?

Vilensky: Multitude is a complex and ambivalent construction which can take a liberation side but it can also move in a fascist direction as we see in Europe today. It problematizes well the change of production relations but it escapes the issue of organization, thus it is praсtically not really useful.

Timofeeva: The concept of multitude is often opposed to the one of “the people” that represents a kind of unity. But I think that today we should reconsider what “the people” really means. Why not think of “the people” as the ones who take a stand against the elites rather than being the stable unity of those who are under the authority of a sovereign? In Russia, for instance, those who protest, the majority that goes against the repressive autocratic police state, are to be thought of in terms of “the people”, not the multitude. The difference is not between the supposed unity of the people and the irreducible multiplicity of the multitude where everyone is unique. The difference is that what is at stake for the people is the classical Marxist antagonism between the oppressed (the people) and the oppressors. The oppressed and the excluded – those are the people. They are not Russian or American people, as those in power represent them. People as a class category and not a national one – this is what I would like to see return into politics. Multitude is a category of immanent resistance. Yes, there is a multitude, but it can mobilize and transform into the people – that’s how resistance turns into a sovereign revolt.

Jurt: The whole idea of progress is a very western, modernist idea. In your performance you referred to indigenous/vernacular knowledge which you tried to link to the most radical European way of negative thinking. Can you elaborate on this?

Vilensky: Here we face a serious problem. Of course, the western tradition of negativity is far away from any indigenous cosmogony which strangely becomes fashionable with western cultural workers who have zero practice and relation to it apart from doing yoga and breathing sessions. Please read the brilliant text by Gene Ray1 – I can hardly add anything to it.