“Reality is more creative than fiction”

A few questions to the artist Miao Ying 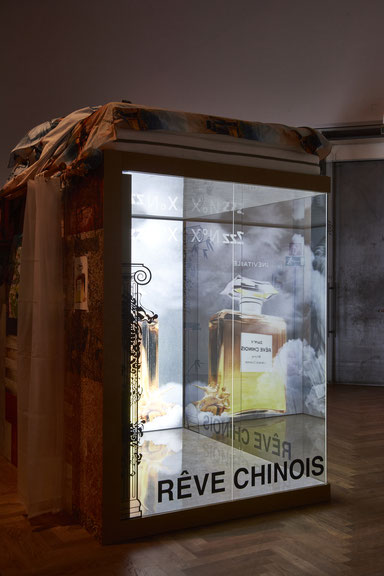 Miao Ying 苗颖 is one of the more successful artists of the young generation in China. Most recently, her works have been shown in the exhibitions Chinese Whispers. Recent Art from the Sigg Collection at the Austrian Museum of Applied Arts Vienna (MAK) and Hysterical Mining at the Kunsthalle Wien. As a millennial and therefore almost inevitably a representative of post-internet art, Miao Ying addresses the ambiguous relation between the dazzling streams of images and the dark side of power and control. By means of GIFs and objects she does not only celebrate a whirring user culture but also visualizes technological barriers set up as a result of censorship and profit mongering. Miao Ying draws her artistic material, the digital images, and the corresponding culture techniques from social media. In the exhibition space, it condenses into a vibrant pastiche as if the users had only just been active.
Miao Ying is currently working on an artistic comment on the social credit system. Western media frequently express their concerns on how this system, announced in 2014, will result in a newly dimensioned, as yet unequalled interconnection of – Orwellian – instruments of surveillance and control. At present, the system is undergoing a development and testing phase that delivers merely superficial insights. In 2020, it is expected to become effective on a national level. Apart from one-sided dystopian warnings there are, however, more critical reflections on this issue. In her book The Age of Surveillance Capitalism (2018) economist Shoshana Zuboff compares the social credit system to the extraction of user data by companies such as Google and Facebook pointing out structural differences resulting from the respective relations between state and industries. The authors of the latest issue of the discursive technology magazine Logic (Issue 7: China 中国) also attempt to render a realistic picture between propaganda and technological feasibility. The China Issue of the MIT Technology Review published last winter presents, among others, artists who critically deal with the Internet. One of them is Miao Ying.

Vera Tollmann: How do you do research, are you following users on WeChat, Insta, and Tiktok? And how do you research the Chinese government activities in the digital realm?

Miao Ying: Most of my research comes from using the internet. From Bilibili [video sharing website for Anime, Manga and game fans where user comments appear live in the video images], to Douyu (live streaming service for games), to Tiktok [video platform allowing users to record lip-synch music videos] I have always been fascinated by the creativity of Chinese netizens (in most cases, they are more creative than others because they have to self-censor), and how quickly people can adopt new tech in China. It is happening so fast, academic theories are far behind.

Tollmann: Since your studies in the US you have been familiar with both digital spheres and its cultural differences, the Western internet dominated by US companies which you accessed in NYC, and the Chinese internet dominated by the Chinese Tech Industry and censorship, which you access in Shanghai. How does it affect your work as an artist to have both perspectives and experiences?

Miao: It doesn't matter to the internet where I am accessing it. I try really hard to access the Western internet (that is blocked) when I am in Shanghai, by using a VPN. It is getting more and more complicated to do so but somehow it still gets me there. And when I am in NYC, I have no problem using the Chinese internet. If anything, I can see China more clearly when I am in the States.

Tollmann: Huawei recently launched a foldable smartphone with the screen folded to the outside. Could this be read as a different approach to digital images and visibility in public space? And how do you imagine this attitude feeding back into user culture as well as into instruments of surveillance and control?

Miao: When I first came to US as a student many years ago, I didn't understand why people would use dryers for their laundry, because in China, we just use the sun and hang our clothes out on the balcony, aka, in public space. The digital future for China is a dystopia for sure, no doubt when the social credit system kicks in, it will be the worst thing ever witnessed. Growing up in China, I am very used to public shaming, low privacy, etc. but big data and public shaming are something else, I think.

Tollmann: I remember protests against internet politics, like the student who in 2011 threw a shoe onto Fang Binxing, the so-called “father” of the firewall. Are protests happening today without being reported in global news?

Miao: Yes, I do remember that too! But things are much different now, in a way, there is no GFW (Great Firewall) anymore. Everything has been substituted, you won’t even know where the wall is.

Tollmann: Is advertisement and political propaganda following the same set of rules in your opinion? What do you think after working with visual material from both contexts?

Miao: Tech companies do a much better job on propaganda, both in the US and in China.

Tollmann: Does the fact that there is a mattress on top of your installation Chinese Dream point to the topic of homelessness, people living in public space, who find shelter and a feeling of safety in advertisement “furniture,” bus stops and the like in the streets? Did you have the social tensions between the very rich and the very poor in mind?

Miao: In China, there are the rich, the poor and there’s nepotism. In this case, those who are rich but who are not connected can also sleep on my mattress. The Chinese dream can only be reached when you are dreaming.

Tollmann: A new work which you are currently developing is looking into the impact of the social credit system. How will you scrutinize this new control system, is it really omnipresent, and how do Chinese citizens deal with it from what you can tell? How does it compare for example with Facebook's mood manipulation studies and targeted advertisement?

Miao: I am an optimist on technology in general, even in China, with all the issues of GFW (Great Firewall) in the past. But I am a complete pessimist on the social credit system. I will not compare it because what Facebook did is a child’s play compared to what big brother can do with big data. I feel very sad for what is going to happen in China.